I know it has been a while since the Nationals in Virginia, but I felt it does deserve a report simply because it was great. I probably had even more fun than during OBX wind the week before, and that is something considering that there was no freestyle at the Nationals.

The event was run by Dave and Melissa Kashy from their home in Virginia. The location is awesome and they did an amazing job! There were free yoga classes in the morning and group dinners every night. This made such a big difference because all of the sudden you are racing with friends instead of strangers (or at least with people you have laughed with at dinner). It brings back the fun in racing where you talk to people during a slow downwind leg on the longboard, cheer for people on their formula gear when they are planing during the long distance race, joke with friends while rounding a buoy, or get tips from the race committee on the boat when crossing the finish line.

I joined the races for open, long distance and slalom. Overall it did not work out the way it was planned because I ended up on completely different gear, but I am very happy about the way everything turned out. I was only able to compete on a longboard in the open class because Chris let me use his Fanatic cat (big thank you!).
The slalom race I ended up doing on my freestyle gear because the course was set way off shore and reports talked about 3 ft swell and 25 - 30 mph winds. Of course by the time I made it out on my Skate and the 5.0 there was maybe 15-20 mph and 1.5 ft chop. Wish I would have not been such a scaredy-cat and used the 6.3 or 7.0 race sail with a slalom board. Next time!
The long distance race was fun because I got to use a Kona for the first time ever (thank you Pam for letting me use yours!). I did not expect to have that much fun on it and ended up trying some freestyle on it after the race. Now we might have to go to the Kona Worlds in October...

Here are some pictures from the 2018 Nationals take by the amazing photographers Glenn Woodell, Wendy Podmenik Darugar, and Alain Nimri:

I just spent two great weeks with old and new friends and lots of wind in Hatteras. The OBX-Wind week was once again a lot of fun and a great success with 220 racers on the water for the long distance races. I took Phil Soltysiak's freestyle clinic this year and learned lots of useful things and had a ton of fun sailing with the other freestylers in the group. Wind every day for two weeks made it pretty much an all around success.
.
The two standouts of the week for me were watching Boujmaa Guilloul wave sail and having all the freestylers on the water. Special thanks to Jon Sassone and Max Robinson for approaching me with tips about some moves I was working on - super useful and very much appreciated! Besides that, just seeing all the amazing freestylers on the water was a huge inspiration and helped a lot in getting a better idea about timing and wind angles.

Here are two pictures from Wyatt and Joup during the freestyle competition (picture credit IWT): 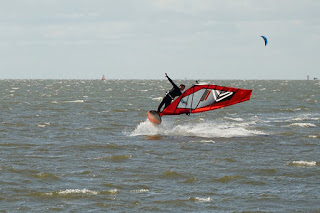 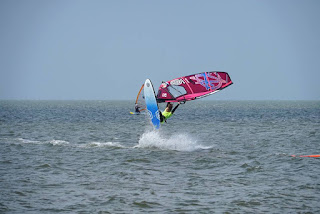 And here are some from Boujmaa at ramp 43 on the ~40mph day (picture credit IWT): 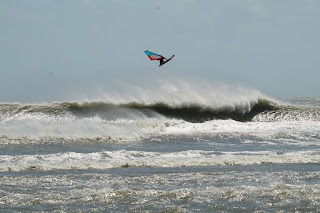 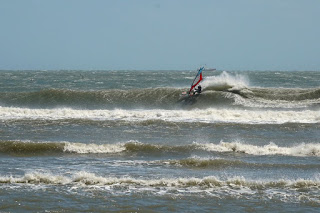 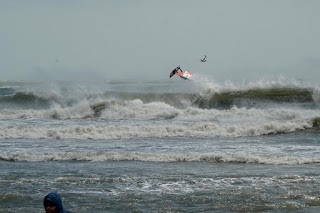 Now Peter and I are in Virginia waiting for our next adventure with the US Nationals starting on Wednesday. Once again we lucked out in finding a great place to stay. Here is our breakfast view at sunrise: 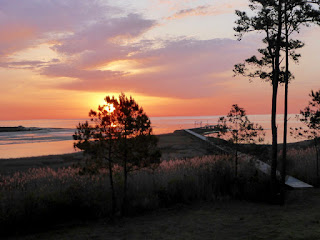 I finally got back to my sewing machine and made something useful for our upcoming trip to Hatteras: a paddle cover. I always worried about my carbon paddle getting all scratched up when throwing it in the van with all the other stuff, so using an old F2 sail, some neoprene, a velcro strap from an old windsurfing boot, and polypropylene webbing, this paddle cover was created in an afternoon: 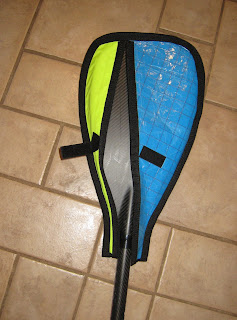 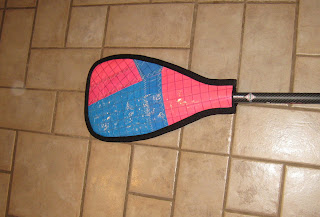 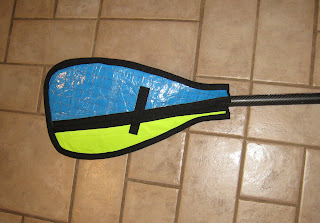 Also, here is a quick picture of the cake I made for Easter (or of what was left when I managed to take a picture): 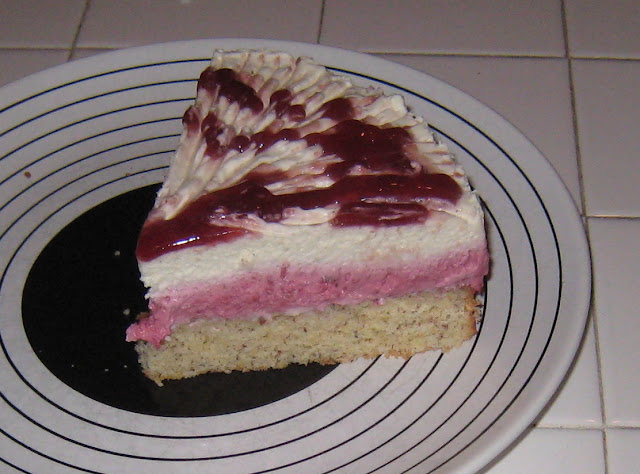 It is a "Käsesahnetorte mit Himbeeren und Mandelbiskuit", which roughly translates to greek yogurt and cream cake with raspberry and almond sponge cake.
Posted by Nina at 5:32 PM No comments:

I just found, for the first time, a good english translation  of one of my favorite stories from Germany. For everyone who is wondering why Peter and I choose to windsurf so much, this explains it very well.

"An investor was at the pier of a small coastal village when a small boat with just one fisherman docked. Inside the small boat were several large yellow fin tuna. The investor complimented the fisherman on the quality of his fish and asked how long it took to catch them.
The fisherman replied, “Only a little while.”
The investor then asked him why didn’t he stay out longer and catch more fish.
The fisherman replied, “I have enough to support my family.”
What do you do with the rest of your time?
I sleep late, fish a little, play with my children, take siestas with my wife, stroll into the village each evening where I drink great beer, and play guitar with my amigos. I have a full and busy life.
The investor scoffed, You should spend more time fishing and with the proceeds buy several boats; eventually you would have a fleet of fishing boats. Instead of selling your catch to a middleman you would sell directly to the processor, eventually opening your own cannery. You would control the product, processing, and distribution. You would then move to the big city, and eventually New York City, to run your expanding enterprise.
But, how long will this all take?
Only 15 to 20 years.
Then what?
The investor laughed and said, “That’s the best part. When the time is right you would sell your company stock to the public and become very rich; you would make millions!”
Millions – then what?
Then you would retire. Move to a small coastal fishing village where you would sleep late, fish a little, play with your kids, take siestas with your wife, stroll to the village in the evenings where you would drink great beer and play your guitar with your amigos."
Originally Written as Anekdote zur Senkung der Arbeitsmoral

It's been a while since I have posted anything, and it was not due to a lack of baking or windsurfing. It is because I finally managed to get an industrial sewing machine!

I managed to find a Bernina 217 in great condition and when I am not windsurfing or baking or doing yoga, I am sewing. Peter cleared out and insulated our unfinished attic for me, so now I have a perfect sail loft up there. I got a sail fixing starter kit from Gerda who used to do sail repairs, ordered a bunch of stuff online, and have received tons of great advice from Bob who taught me how to fix sails this spring in Texas and is patiently answering emails with questions that came up sewing sail materials.

I started out making some bags out of old sails, neoprene, and sailcloth to get a feeling for the new machine and for sewing with sail materials. I absolutely love the machine since it sews so much nicer than the little plastic home sewing machine I used before. Fixing sails still takes some time as I have only done 2 by myself so far, but I am happy with the result and just have to improve my efficiency. I have not taken any pictures of fixing the sails, but here are some pictures of my sewing machine, the sail loft, my self-made sewing machine cover, and a laptop bag, duffel bag, and shoulder bag I made:

I didn't feel like doing freestyle today in cold and rainy weather and decided to join Peter for some slalom action in East Bay instead. I went out on my 89l slalom board, the 5.6 race sail, and a 32 pointer fin. And managed to sail almost 4 runs before my session was cut short by a "spectacular catapult" (Peter's words).

I am not really sure what happened, but think it was a combination of using the waist harness the first time on race gear, and having a fin that was a bit too big. I got the waist harness idea from seeing a few of the better guys using it with slalom gear and thought I'd give it a try. I was perfectly fine, planing along in a straight line at around 50 km/h when a gust hit. I believe the board must have railed up due to the big fin (which I had noticed before but was being too lazy to change), and that in combination with the waist harness made it impossible for me to hold the sail down. The landing was pretty hard and I managed to hit the mast with the side of my head which has now a lump and a hot swollen ear. It also took me 10 minutes to get back up on the board due to the mast sleeve being full of water and me needing to figure out how to deal with that. On the positive side I learned how to water start a sail where I could not even push the tip out of the water, and to use a smaller fin and the seat harness for speed sailing in the future. The trick for water starting was to put the mast on the back of the board. Even though the boom did not touch it this gave it enough lift that I managed to push the tip up int the air to drain the mast sleeve.

Luckily I am fine except for a slight headache and all our gear survived! The good news is this combo has quite a bit of potential as I managed to hit 29 knots in the few runs before I crashed while I was still changing stuff around and not even doing any speed runs.

I had bought some poppy seeds for my homemade bread, but never ended up using them, so I ended up making this cake with them: 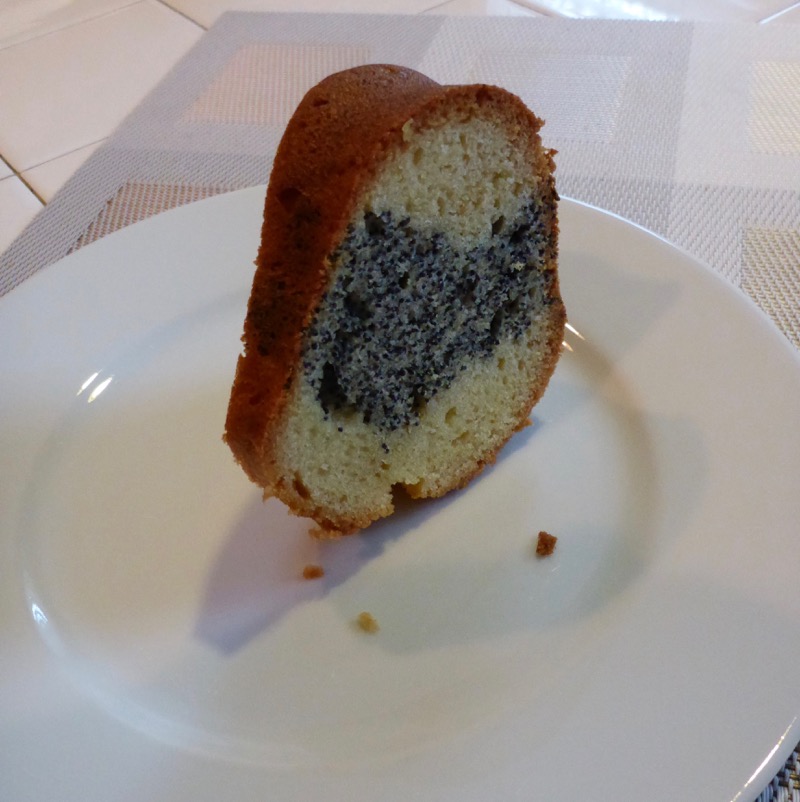 The cake batter is made with Baileys which tastes really good in this combination. Here is the recipe:

To make the poppy seed mix, I used 100g poppy seeds, 45 ml milk, 30 g sugar and 20 g butter. Melt the butter in a small pot and add the milk, sugar and poppy seeds. Heat the mix for about 1 1/2 minutes, take it off the heat, and let it cool a bit. The original recipe calls for grinding the poppy seeds, but this was not possible with my normal kitchen mixer, so I used them the way they were. The main difference will be the texture of your poppy seed layer in the cake - ground poppy seeds will make a finer texture (obviously).